The cost of a weekly habit of cigarettes, alcohol, marijuana, amphetamines, cocaine and opioids costs a lot less in SA than in Australia

The cost of maintaining a drugs, booze and cigarettes habit got a lot more expensive in the US last year, rising the most of almost anywhere in the world, the annual Bloomberg Global Vice Index shows.

Americans had to fork out more than $200 more for a basket of so-called vice goods last year compared to 2016, with only New Zealand seeing a bigger increase. The gauge compares the share of income needed to maintain a broad weekly habit of cigarettes, alcohol, marijuana, amphetamines, cocaine and opioids across more than 100 countries. Doing so eats up more than a third of the average weekly pay slips in more than three quarters of the economies tracked, the index shows.

The gauge is purely an economic indicator, not a judgment about morality or legality. Nor does it track gambling, prostitution or other illicit activities. Vice is cheapest in Luxembourg, where the cost comes in at less than 10% of the $2,071 average weekly wage, which is the highest in the world. The Bahamas, Switzerland, Iceland and France round out the top five for affordability.

By contrast, Ukrainians must spend 13 times their weekly salary for the same fix, making it one of the costliest places for those making local wages. Pakistan, Nepal and Burkina Faso also score near the top for higher prices.

The vice indicator uses US prices as the global benchmark. At 54% of pay, or $617, US ranked 38 in terms of affordability, compared with 17 a year earlier.

While laws remain a key factor for narcotics prices, those dynamics may be in flux as more drug sales move online. The new avenues make some drug markets less risky as they let users “buy drugs with a crypto-currency, such as bitcoin, and have their purchases delivered to them in a concealed manner,” the UNs 2017 World Drug Report says.

“Something like bitcoin has appealed to dealers because it’s anonymous,” said Jonathan Caulkins, a professor at Carnegie Mellon University in Pittsburgh and former co-director of the RAND Drug Policy Research Centre. “Banking creates a trail that they don’t want.”

The gauge is purely an economic indicator, not a judgment about morality or legality

Vice prices tumbled the most in Iran, Norway and South Korea, all of which saw the weekly tab for the basket of drugs, alcohol and tobacco fall by more than $200 from the prior year.

The difficulty in collecting data on illegal activity means survey responses often have a lag, which makes comparisons harder. As a result, nations with missing data weren’t included in the overall index and those with data had wide estimated ranges.

This year’s Bloomberg Vice Index also included the size of the “shadow” drug economy in different regions by approximating the retail value of narcotics seized by law enforcement.

Like other businesses, retail-wholesale pricing dynamics and supply-chain management are the keys to efficiency. “A shadow economy, or underground economy, is run as an efficient business like the official one,” said Friedrich Schneider, an economics professor at Johannes Kepler University in Linz, Austria.

On mark-ups for narcotics prices, “cannabis markets tend to be more competitive in most countries, especially because it is frequently produced locally”, according to Manolis Galenianos, an economics professor at Royal Holloway University of London.

“Cocaine and opioids, by contrast, have to be imported from abroad, which requires a much higher level of sophistication and is, therefore, done by only a few organisations”, leading to more concentrated markets and higher markups, Galenianos said.

Data sourced from the UN, World Health Organisation, World Bank and International Monetary Fund. Here’s a look at the top 75 most affordable places for vice: 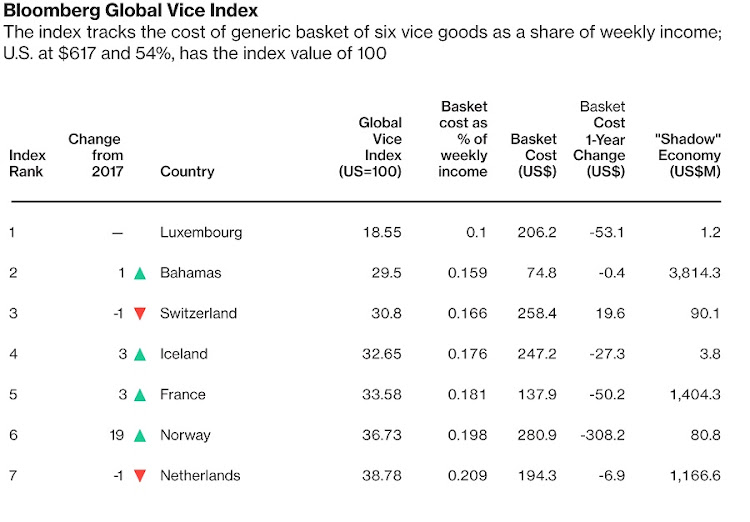 Opioid Overdoses: An American Epidemic On the Verge of Going Global
April 23, 2018

The Political Risk Factors of a Rapidly Changing Global Diet and Our Future Food Needs
November 15, 2017

40 Million in Modern Slavery and 152 Million in Child Labor Around the World
September 20, 2017